One of the disadvantages of working in the army is missing out on family events when deployed to another country. One couple in the US expected this to be the case with the birth of their first child.

Army Sergeant Zach Shyrock and his wife Brittany, assumed Zach would not be home to witness the arrival of their first baby. The sergeant was deployed to Afghanistan and wasn’t scheduled to arrive home to Atlanta a month after Brittany’s due date.

The couple were surprised to learn Zach was chosen to join a small group of soldiers to arrive home two months earlier than expected. This meant Zach would be home a month before Brittany’s due date.

The expectant couple made plans to fit in as many errands together as possible before their baby arrived. Things like decorating the nursery and attending a ‘baby boot camp’ class together were scheduled to be done in those weeks before their baby was due. But their baby had other plans.

When Zach was on his way home from Afghanistan, Brittany’s waters broke and suddenly Zach was in a race to get home so he could be there for the birth.

Of course there were delays. When Zac arrived in Charlotte, NC, he heard that Brittany’s waters had broken, Zac booked the next flight to Atlanta. During that time Brittany became 5cm dilated.

When Brittany was 10cm dilated, Zach’s plane was delayed by an hour-and-a-half after a deer was found on the runway.

While Brittany was focusing on the birth of her baby and resting, her best friend handled Zach’s transportation to ensure he got to the hospital.

When Brittany was just minutes from pushing, she heard everyone clapping and yelling in the hallway.

The new mum told Babble, “When I heard everyone clapping and yelling in the hallway, my eyes filled with tears.

“I knew my husband had made it home. It seemed like a dream when I saw him walk through the door. After a hug and a welcome home kiss from him, I have never been more motivated in my life.”

Zach was able to be by his wife’s side as she pushed and thirty minutes later, Myra was delivered at 5 pounds, 7 ounces, 5 weeks before her due arrival. 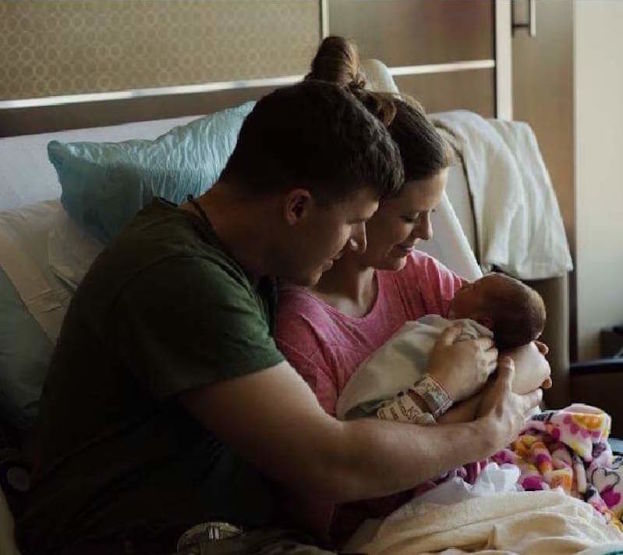 The new dad admitted to being emotional when he was reunited with his wife.