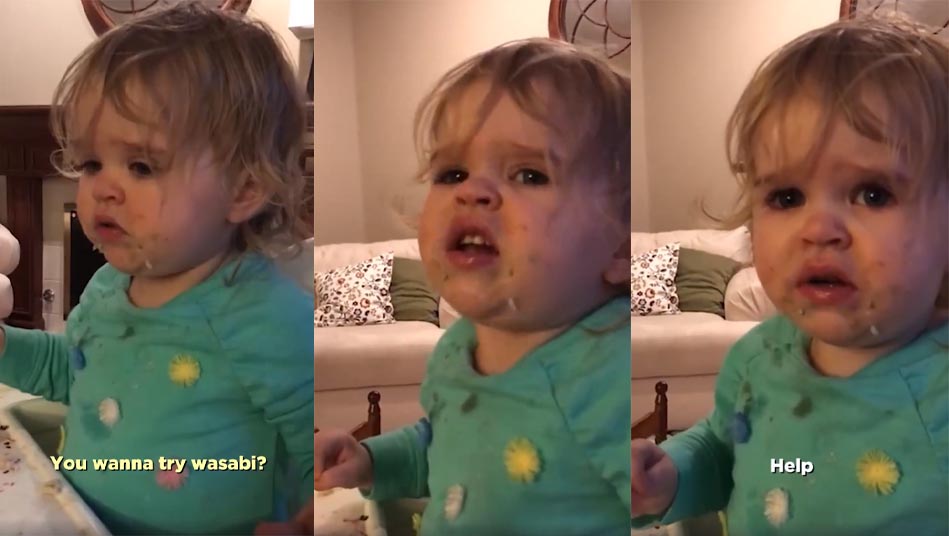 A mum has been accused of child abuse after she filmed her toddler trying wasabi for the first time. The video, shared on Facebook by Unilad, has been watched more than 14 million times since it was shared two weeks ago.

“You want to try wasabi?” the mum asks her sweet little daughter, to which she immediately replies “no.”

The mother’s voice is clearly heard asking her little one twice more: is she sure she doesn’t want to try it? Again, the little girl says no. But then, realising that her mum is taking the offered goodies away, she changes her mind and gives in, taking a tiny bite of the extremely hot condiment.

There are lots of videos out there of children trying lemons for the first time, and let’s face it, they are funny. Giggles are overflowing while parents watch their baby’s little faces squish up as the sour fruit hits their taste buds for the first time. Then the child makes their decision — do they go back for more or are they done?

While she might sound like she is trying to put her daughter off sampling the wasabi, she is clearly coercing her. She asked her three times. And when her daughter says “wasabi” with an urgency to try it, there is no firm denial, no outright refusal. The mum wanted her to try it so she could film her reaction, plain and simple.

And that doesn’t sit well with me.

While wasabi and other hot or spicy foods are fine to feed to children in small amounts according to their own preferences, it isn’t the act of feeding a toddler something spicy that is abusive in itself. Many children enjoy spicy foods, and it is important to introduce different flavours to your child as they grow.

But this is a bit different. This was cruel.

Those big eyes and her little voice asking for help at the end, to the person she trusts most in the world to look after her, to specifically protect her from feeling the way she is feeling in that moment – helpless and in pain or discomfort, is just heartbreaking. And then her mother laughs at her in response.

That right there is why people are calling this child abuse. It is emotional abuse, a betrayal of trust just for laughs at her innocent toddler’s expense.