This Mum’s Reaction to Having a Baby Boy is Priceless

This Mum’s Reaction to Having a Baby Boy is Priceless

Finding out the sex of your baby before they are born has become the norm these days. Couples, eager to know the sex of their baby, often hold a gender reveal so it’s a big surprise to find out if they are expecting a son or daughter.

But Dara Crouch and her husband chose to find out the gender of their baby the traditional way.

The couple instituted a rule to never find out the gender of their babies until they were delivered. The couple waited until their first baby was born to find out they had a daughter. The couple chose to do the same with the birth of their second child.

Pregnant the second time around, Dara thought she was having another girl. The odds were in their favour as there hadn’t been a baby boy born on her side of the family for 50 years. But her husband didn’t share her same conviction.

“My husband thought from the beginning that it was a boy,” Dara said. “I was not so convinced. I had this weird connection to my daughter’s clothes, and since their birthdays would only be three weeks apart, I knew I could reuse them.”

But Dara’s husband was right. Her reaction to the news of delivering a baby boy was captured beautifully by photographer Neely Ker-Fox.

Dara explained her reaction, “I started freaking out because I had never been around a little boy and didn’t know much about raising one,” Dara said. “When my midwife, Melissa, held him up, I was in complete shock! It was a boy, and I lost it! I was so excited, and so in love! I couldn’t imagine it being any other way!”

Ker-Fox has photographed over 100 births with all various reactions, but Dara’s reaction is one of the most priceless she explained. 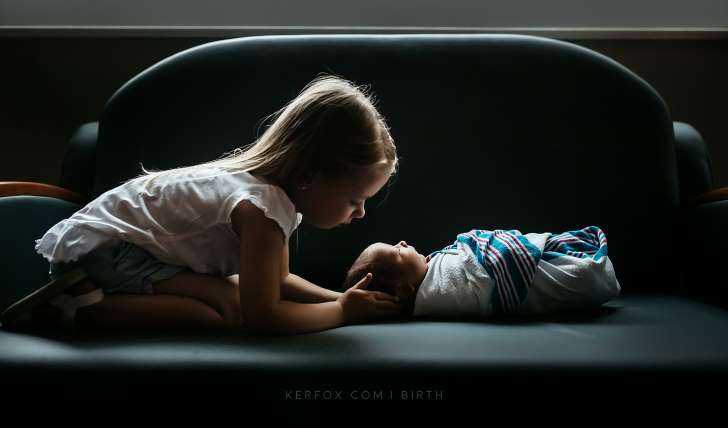 “When Dara looked over at me, and I captured this reaction knowing the innocent and very real worries we have when our second child comes into the world (boy or girl), I busted into tears behind the camera,” Neely said. “All of that anxiety and worry vanished in blink of an eye. And no matter what we have, the love we have for our kids is instantaneous and overwhelms every cell in our bodies.”

Congratulations to Dara and her family and on the arrival of their gorgeous baby boy.