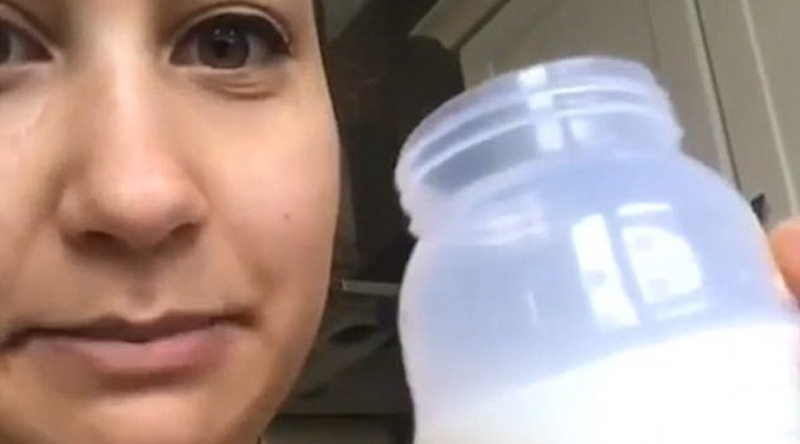 Have you ever tried your own breastmilk? Has your partner? How would you feel if you were tricked into drinking some without your knowledge?

A new mum in the UK has divided opinions when her video of her breastmilk trickery went viral. Charlotte Adams, 28, from Surrey, posted a video online where she is shown secretly preparing her husband Rob’s breakfast, including a cup of tea made with her own milk.

The video, shared by the Facebook page Netmums, has since gone viral with over 150,000 views. And with that, come opinions. Lots of ’em.

There were comments varying from “It’s the most disgusting thing I’ve ever seen” to “it’s better for him than an animals milk” and “My partner did this willingly”.

Others not so much:

Some wondered why the hell anyone would waste precious breastmilk:

Some compared it to a man ejaculating into their partner’s food:

But some commenters really opposed to the idea, bringing up the issue of consent to back their point:

Personally, I don’t have a problem with it —  within the confines of an intimate relationship. By that, I mean that if I was in a relationship with a new mother and she did that to me, I don’t think I’d mind. But if one of my friends or sisters made me a cuppa with her breastmilk without my knowledge, we’d have to have a little chat about boundaries and consent. And I’d be getting my own drinks from that point on.

I’ve had four babies and never once did it occur to me or my husband to drink my breastmilk. We certainly didn’t prank each other with it, but each to their own.

It is interesting though, that people have such differing opinions on the subject, ranging from not batting an eyelid to complete disgust.

Where on the scale do you sit? What are your thoughts?