When Minnesota mum shared a photo of her baby smiling on Facebook she never dreamed it would quickly go viral.

Lauren Vinje shared a photo recently of her baby girl Freya from 2014. The endearing photo was captured when baby Freya was only five days old, and was an inpatient in the Neonatal Intensive Care Unit (NICU) after her premature birth at 34 weeks gestation. 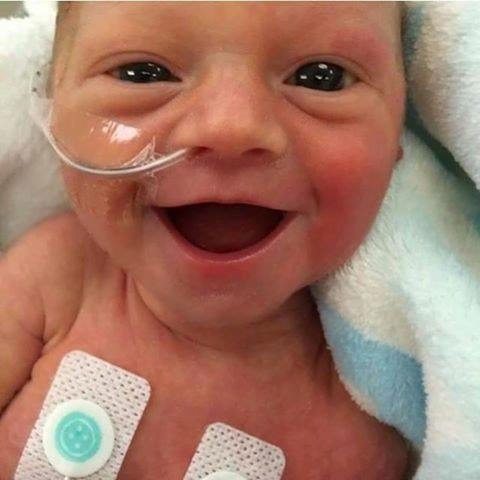 The photo of this tiny tot soon went viral with only 10,000 likes, comments and shares, and Dad David said his favourite part was that one photo had brought so many people with differing backgrounds together. Lauren said “That picture has always been a favourite of ours,”. “I knew it would put a smile on people’s faces…it’s nice knowing her smile has been able to put a smile on faces around the world.” She told TODAY USA.

We are all born into this world in our own unique way, and it has been so cool to see the responses the photo has generated

“This picture has offered relief and joy to us as a family, and it’s been a blessing to see it influence others in an unpredictable way.” Said the proud dad.

Lauren found out when she was just 28 weeks pregnant that she was suffering from a condition called Pre-Eclampsia, a condition that is usually characterised by high blood pressure among other issues and if left untreated can be incredibly dangerous or fatal.

Mum delivered her little girl on Thanksgiving and she was in the NICU for four weeks until her discharge home just a few days before her first christmas.

When she was admitted to hospital just six weeks later for an induction at 34 weeks, little Freya was found to lying sideways and would need an emergency Caesarean Section to come into the world.

Freya who is now two years old is the happy big sister to baby sister Elowen who is two months old.