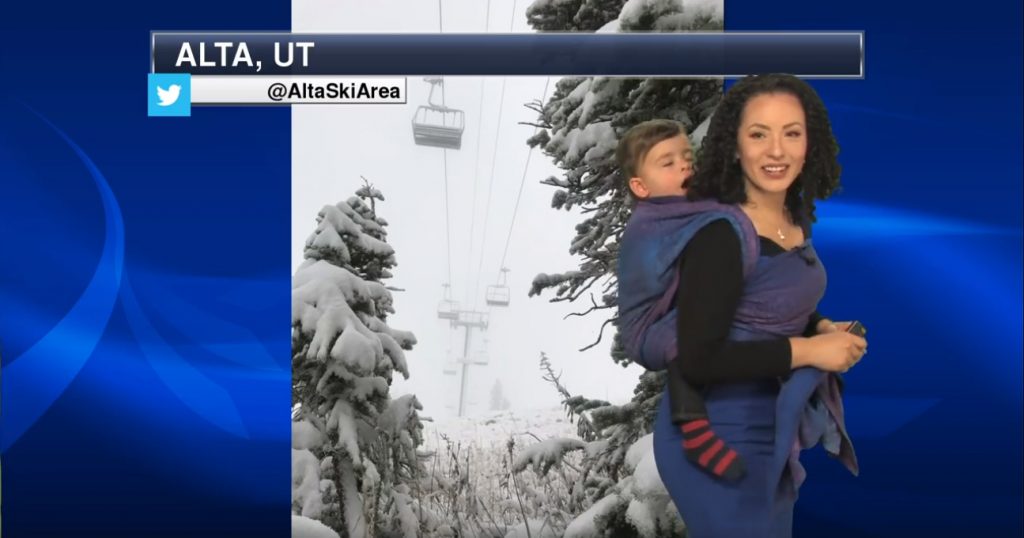 Last week was International Babywearing Week and what better way to celebrate and promote awareness of the benefits of babywearing than by doing so on television!

One amazing mum decided that the best way she could advocate for babywearing was to do so while she was at work. It just so happened that her job involves being on camera as a meteorologist for an online weather consultancy company and her babywearing has gone viral.

Praedictix meteorologist and mum Susie Martin strapped her adorable little son to her back as she presented her weather forecast. Her sleepy “handy assistant” was snugly wrapped against her back as she remained professional and informative as per usual. Her beautiful ombre sling was tied like a pro and knotted across her front.

“Meteorologist Susie Martin and a special guest host your national forecast today,” the video caption reads. “Unfortunately, her assistant was found sleeping on the job… We apologize for the inconvenience.”

The video has been viewed more than a million times since it was shared by Praedictix, with many people commenting about her professionalism and how wonderful her employers are for allowing her to raise awareness in this way.

“This is amazing. Go mum!” wrote one woman. “Professional and knowledgeable all the while too!”

“Woohoo mama! She ain’t no rookie either, my chest passes are never that beautifully run. Nice work!” wrote another.

“This is my favourite forecast that’s ever been given. I love seeing women being professionals while mothering well. Props for such a good wrap job!”

Babywearing offers both functional and emotional benefits for both mother and baby. It is convenient, allowing the wearer to use both hands to tend to basic tasks at hand. It strengthens the bond between caregivers and the child and can help babies to settle and sleep deeply.

Babywearing has been proven to be a useful parenting tool from supporting reflux and hip dysplasia, to preventing flat head syndrome and assisting with healthy emotional attachment.

You can find more information on how to safely wear your baby over at Australian Breastfeeding Association and at Baby Wearing International.