If Big Bird Didn’t Have a Problem With Breastfeeding, Why do we? 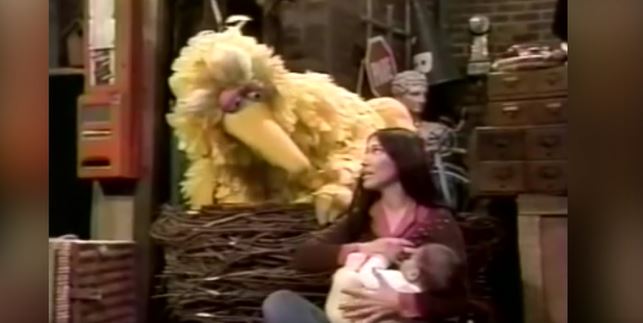 If Big Bird Didn’t Have a Problem With Breastfeeding, Why do we?

In 1977, Sesame Street aired a segment where a new mum breastfed her baby in front of Big Bird.

The new mum was Buffy Sainte-Marie, a Native Canadian musician, educator, and activist and when Big Bird was intrigued and asked her what she was doing, she gave a direct answer.

Buffy then explained to Big Bird that lots of mums feed their babies this way, but not all mothers, but lots of mothers do.

“And he likes it because it’s nice and sweet and warm and it’s natural for him. It’s good for him.”

Buffy tells Big Bird she likes to nurse Cody because she gets to hug him while she nurses.

Big Bird then ends the segment with saying “That’s nice”.

The segment has been shared various times since its airing back in 1977. It’s been bought back into the spotlight because of the stark contrast to what was acceptable in the 70’s is now often judged and highly criticized publicly, 40 years later.

The comfortable stance of feeding a baby on television is how breastfeeding should take place anywhere. It’s a natural way to feed a baby. And of course, for mums who bottle feed, they shouldn’t be judged either because they are feeding their baby. Criticising a mum on how she feeds her baby is a reflection on the person judging, than the mother who is doing the best for her child.

If Big Bird didn’t have a problem with breastfeeding in public, then why should anyone else?

As one commenter made on the video, that has been made public on YouTube, “That moment when a giant yellow bird is more mature than many adults in today’s society.”