The day you and your partner decide to start a family can be a daunting, yet exciting season in your life. The season can carry many unknowns and fears, as conception isn’t something that can happen ‘overnight’.

For some couples though, there is no planning involved and it can be an unexpected surprise when they find out they are going to be parents sooner than they well… expected.

Amanda Diesen and Todd Krieg are one of those couples who’s family plans have accelerated unexpectedly. But their story is a beautiful one to be inspired by. 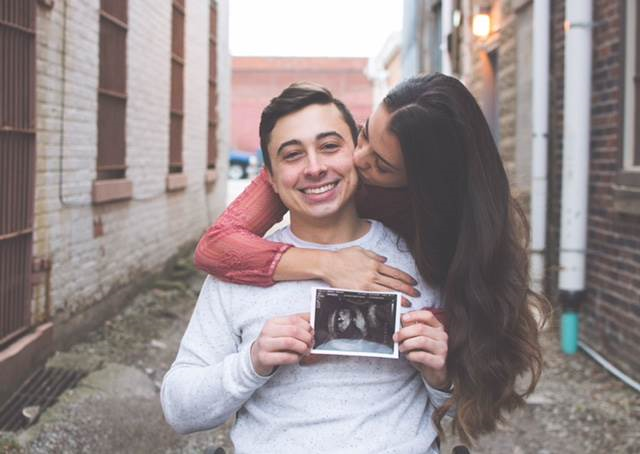 The young couple have only been together for a year and they have faced many challenges as Todd is a paraplegic. Todd became paralysed after a biking accident in 2014 and travelled from Ohio to California to attend a rehabilitation program. It was there that he met Amanda, who worked as a recovery specialist at the facility and they fell in love. Todd returned to Ohio in 2016 and Amanda followed. Soon after, the couple found out they were pregnant with their first child.

Amanda told TODAY parents, “We definitely weren’t trying to have a baby — we wanted to get engaged, get married, and then start trying in a few years.

“We found out at the beginning of December and were extremely shocked and overwhelmed. We took a test together and just about freaked out

“It was au natural, no IVF. Doctors had said it was possible, but the chances were very slim — that it probably wouldn’t happen without help like IVF or other devices.”

The couple were thrilled with their unexpected pregnancy and chose to announce it to family and friends with a fun photo shoot. Amanda researched Pinterest for ideas on how to share their news and they came up with the phrase “It still works” as the message in their photo. 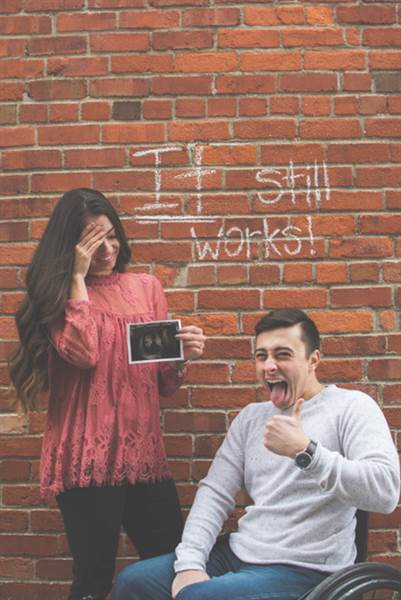 “We are two of the goofiest people together,” admitted Amanda.

“(The announcement) is slightly immature and inappropriate, but everyone secretly loves that stuff. I feel our story is very unique and inspiring, and my hope is that it brings hope to anyone else looking for love — that it literally can happen in the most unexpected place with the most unexpected person — so be open to change.”

During the shoot, Todd proposed to Amanda and she said yes! Their story was posted on a bridal website in the hopes of winning a free wedding.

We wish the young couple all the love and best wishes for the season ahead. Despite the happy announcements, life hasn’t been easy for Todd.

“Of course there are moments of sadness and we can’t joke about it all the time — he truly is in pain constantly — but I’m thankful to do life together and to be able to bring him up.

“Todd brings so much joy to my life and everyone around us, and I can’t wait to watch him be an amazing father to our son.” 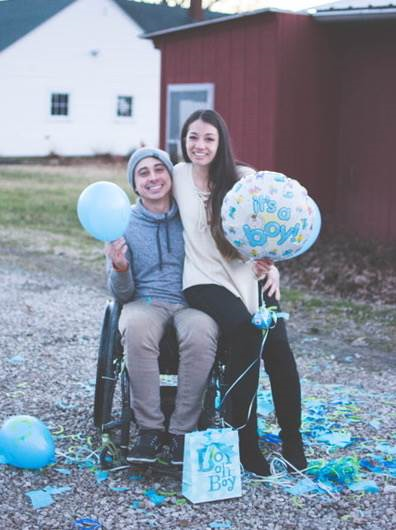