Babypod: The Speaker Designed to go Inside Your Vagina 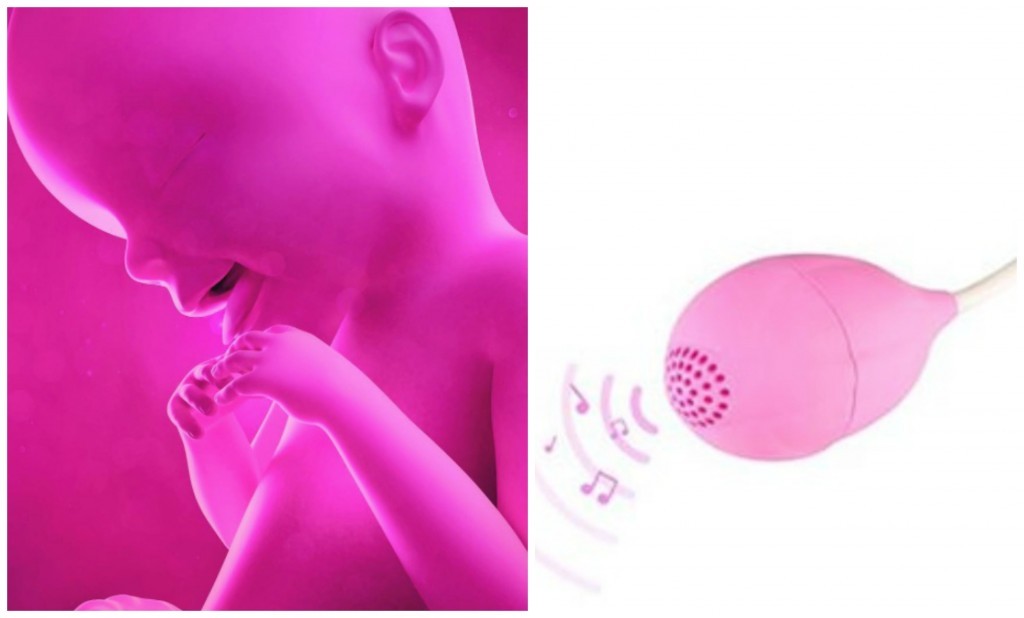 Ever wish you could communicate with your unborn baby?

Well, thanks to Spanish company Babypod apparently you can now make like Adele and say ‘Hello from the other side’ with the aid of their revolutionary speaker that allows you to play music to your baby in the womb. Unlike ‘prenatal speakers’ that have been on the market for years (speakers that attach to a pregnant woman’s belly) the Babypod is a small pink speaker that is placed inside the vagina.

Research suggests that babies respond to music in the womb so the Babypod’s aim is to stimulate the neurons in the brainstem responsible for vocalisation and communication.

Babies learn to speak in response to sound stimuli, especially melodic sound Babypod is a device that stimulates before birth through music.  With Babypod, babies learn to vocalise from the womb. (Source: Babypod website)

According to the Babypod website the only way for music to really reach a baby in utero is vaginally.

Hearing is the first sense developed in the embryo. After only sixteen weeks the hearing system of an unborn baby is fully developed but, can babies hear? Until now babies were believed to perceive sounds as of week twenty-six. However, a recent study by Institut Marquès has shown that they can hear from week sixteen and, moreover, the study revealed that babies react to musical stimuli.

At sixteen weeks babies begin to hear different sounds; where do they come from? On the one hand, from inside their mother – the beating of her heart, her breathing, her voice-, and on the other hand, from the outside and things she is doing. However, the baby is isolated from external sounds that are muffled, at about 30 decibels, a volume like a whisper. In addition, the sounds are very repetitive, so babies get used to them quickly and are not kept from sleeping. While inside the belly, the baby can perceive and remember differences in the rhythm and intonation of the mother’s voice, but all the sounds are very distorted and muffled. Babies cannot hear external sounds or the mother’s voice as emitted.

The uterus is a place protected from the exterior, and it is the mother’s body that carries out this protecting role through multiple layers of soft tissue. These attenuate the intensity of sound and distort it in its journey to the uterus; it’s similar to what happens when you hear a conversation in the next-door room without catching everything that is said.

If the sound is generated at the level of the mother’s abdomen –using headphones for example- part of the sound is scattered in the environment, and part is absorbed by the layers of soft tissue –the abdominal wall and uterus- so the baby will hear just a murmur, similar to what happens when placing a pillow over a loudspeaker; it is also similar to the background sounds in a forest. 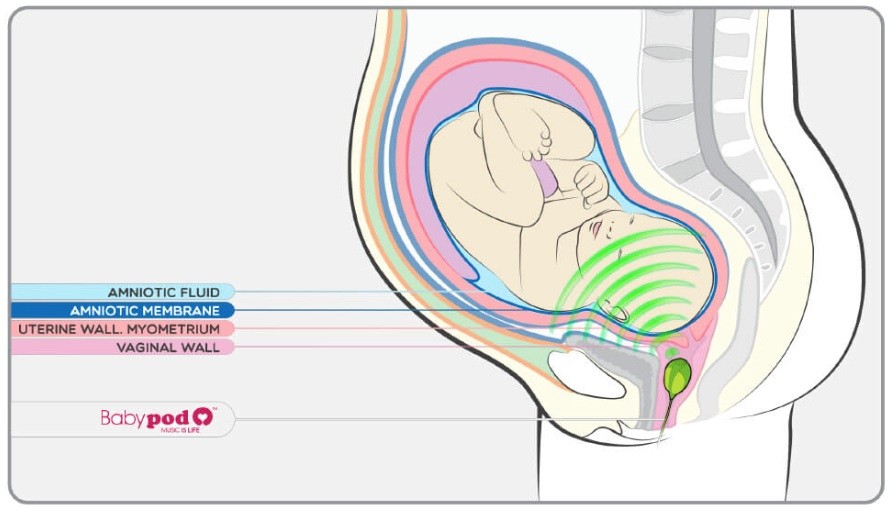 This is solely possible via the vagina.

The vagina is a closed space, so sound is not dispersed in the environment. In addition, there are less soft tissue layers separating the baby from the sound target, only the vaginal and uterine walls. By placing a speaker inside the vagina, we overcome the barrier formed by the abdominal wall and the baby can hear sounds with almost as much intensity and clarity as when emitted.

The Babypod costs a little over £90, (which although they aren’t yet available in Australia), at the current exchange rate is equal to approximately $187.

What do you think? Fad or fantastic?

Would you use the Babypod device to play music to your unborn baby?
development pregnancy technology