Kate Winslet is a famous Hollywood actress that is no stranger to critical assumptions, people belittling her efforts, or judging her solely on the basis of her appearance. 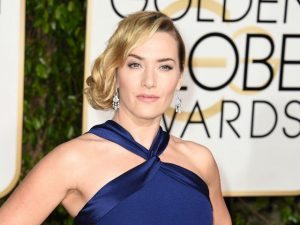 Recently I wrote an article entitled I See You; An Open Letter To The Less Popular Kids that touched on the self esteem issues that a child growing up somewhat unpopular in the playground, may have to face on a daily basis.

Although doubt and insecurities don’t discriminate. They don’t only plague the shy introverted cases. This became evident in a video message where Kate Winslet was filmed at the British Academy Film Awards. In this clip, she dedicated her victory to “all the young women who doubt themselves”.

This video touches on the issues that even Kate Winslet of Titanic proportions faced when she was a child of just 14, being told that she would need to settle for “the fat girl parts” if she were to continue on in her venture into becoming an actress.

Her inspirational message to “any woman who has ever been put down”, is to believe in themselves and not listen to the naysayer’s. In her message she admits “not listening to any of it”, when she was told discouraging opinions by people close to her. People she trusted. People who may have steered her in the wrong direction had she not had enough courage to keep working toward her goal.

Kate goes on to say “Keep doing it, keep believing in yourself”. She admits that is was hard at times and she had to dig deep to find the strength to overcome her fears and insecurities. Although the courage displayed by her in her most vulnerable time has lead her on the path in becoming exactly what and who she set out to become.

I feel that this message is a particularly important ones for young children struggling to find their purpose in life as a direct result of being made to feel less than.

Vulnerable children need to be reminded that at the end of the day the opinions of others should not dictate their success in life. Their ability to believe in themselves, or especially dictate their worth.

This clip of a woman who’s many successes aren’t limited to the form of an Academy Award.

One thing I always tell my children, on a daily basis these days, that just because someone says something, it doesn’t make it true. They hold the power to either let it get them down, or to treat the opinions of others with a grain of salt.

I want my children to have the power and not relinquish it to people who are most likely struggling with their own issues.

Remind your children, not to limit their success in life by the uninformed opinions of others. The only opinion that should matter, is the one they have of themselves.

“You shouldn’t be doubting, you should just be going for it.”