Three year old Roo Shattuck is just a kid, a happy kid who was playing in the park with his mum when a man came up to him and said “You’re a boy. She’s a bad Mummy. It’s child abuse”

So why did this random man accuse Roo’s Mum Jen Anderson Shattuck of being a bad mother? Because her lovely little boy wanted to wear a tutu and she let him.When the man started taking photos of her and her son and wouldn’t stop even when asked too, Jen Anderson Shattuck felt so worried that she called the police to report him.

He asked the Mum “I’m just curious, why do you keep doing this to your son?” She says “He wasn’t curious. He didn’t want answers. He wanted to make sure we both knew that what my son was doing –what I was ALLOWING him to do – was wrong” she posted.

The concerned mother took to Facebook in a post that has now been shared more than 45,000 times worldwide to make sure her son and other know that he shouldn’t feel unsafe or insecure with who he is or even just with how he dresses. “I will not be intimidated. I will not be made to feel vulnerable or afraid. I will not let angry strangers tell my son what he can or cannot wear,” she said.”I will defend, shouting, his right to walk down the street in peace, wearing whatever items of clothing he wants to wear.” 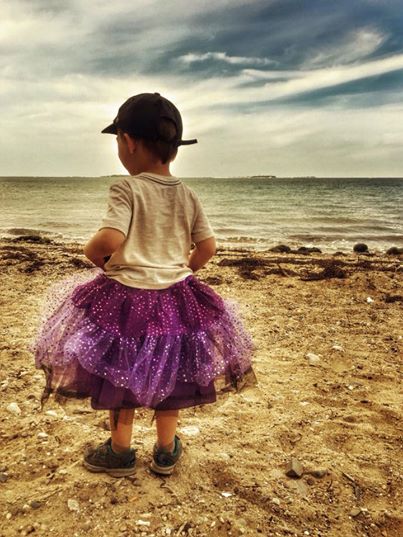 In a show of solidarity and support other parents across the world have shared photos of themselves and their children wearing tutus, dresses and skirts along with #TutusForRoo. On Sunday Mrs Shattuck posted again saying thankyou for the outpouring of love and support for her and her family, “Thank you, from the bottom of my heart, for your kindness (and for the many photos you have sent of your dress-, skirt-, and tutu-loving offspring, who are adorable,” but also said “Know that my goal is not to change your mind or the way you choose to parent. My only goal is to support my son.”

Jen Anderson Shattuck says her son is still concerned and has asked “Is the man coming back? The bad man? Is he going to shout more unkind things about my skirt? Is he going to take more photos?” Her response “The world may love my son for who he is but I do. I was put on this earth to make sure he knows it. I will shout my love from street corners. I will defend, shouting, his right to walk down the street in peace”