Scarlett Johansson is a well known and respected actress. But did you know the girl can cook too!?

In 2010, Scarlett Johansson shared her love of cooking with In Style Magazine saying, “I like cooking alone. I find it very therapeutic. I put on some music, maybe have a glass of wine, and make something like a turkey bolognese or a nice frittata.”

Scarlett Johansson has taken her love of food one extra step. She has a popcorn shop!

Scarlett‘s Paris popcorn shop, Yummy Pop, offers a variety of unique flavours. Although a standout favourite for the actress is the salted caramel and Nutella flavour. 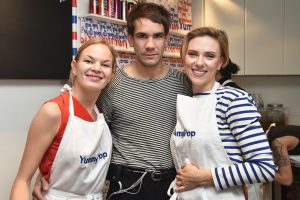 “I think the hazelnut flavour of the chocolate and the nutty flavour popcorn are a perfect compliment,” she said in a PEOPLE interview. “Everything is better when it’s smothered in Nutella—especially popcorn.”

“My hope is for Yummy Pop to become a Parisian snacking staple and a symbol of friendship between my two most beloved cities, Paris and New York,” she said in a statement before the opening.

For this chocolatey version, Scarlett has a trick to make the flavour even more pronounced: “I sprinkle mine with a little sea salt for some sweet and salty goodness,” she says.

4. Spread popcorn evenly on prepared baking sheets. Bake in preheated oven, stirring occasionally, until mixture begins to harden, 20 to 30 minutes. Remove from oven, and let stand until hardened and crisp, 5 to 10 minutes.