Three nurses have put their heads together to create a drape that allows mums who have caesareans, instant skin-to-skin contact with their baby the moment they are born.

The ‘skin-to-skin c-section drape’ is being tested in America right now. It has a sealable hole in the surgical drape so when the baby is delivered, they can be passed through the hole to be laid on mummy’s chest. 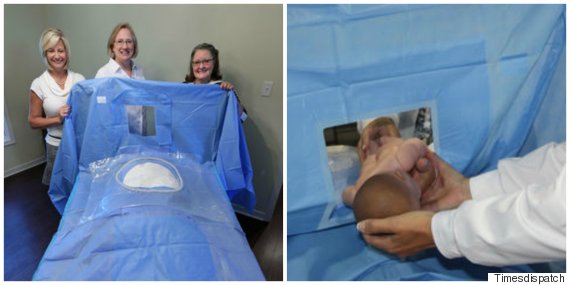 The nurses, Kimberly Jarrelle, Deborah Burbic and Jess Niccoli, who are based in Richmond, America, came up with concept after watching how empowering it was for mums to have immediate contact with their babies after a natural birth.

Burbic told Richmond.com, “In c-sections, more often than not, women who wanted that experience were told ‘No, this is a sterile environment. We can’t do that in the operating room’.”

During a c-section, a drape is placed between the mother and doctors to block the view during the operation. Once the baby is born, they are immediately taken to be cleaned, weighed and sometimes put on a warmer, as operating rooms are cool. Some mums can be waiting between 5 to 30 minutes to hold their baby.

The newly designed drape would allow the baby to be passed through to mum after the birth, and the the closable flap would maintain the sterility of the surgical site, allowing the doctor to stitch mum up.

Since the product’s invention, the design has been patented and the nurses have set up their company, Clever Medical.

The drape has been introduced at the Association of Women’s Health, Obstetric and Neonatral Nurses Conference where hospitals have agreed to test the drape.

What do you think of the new concept? How long was it before you could hold your baby after you had your c-section?